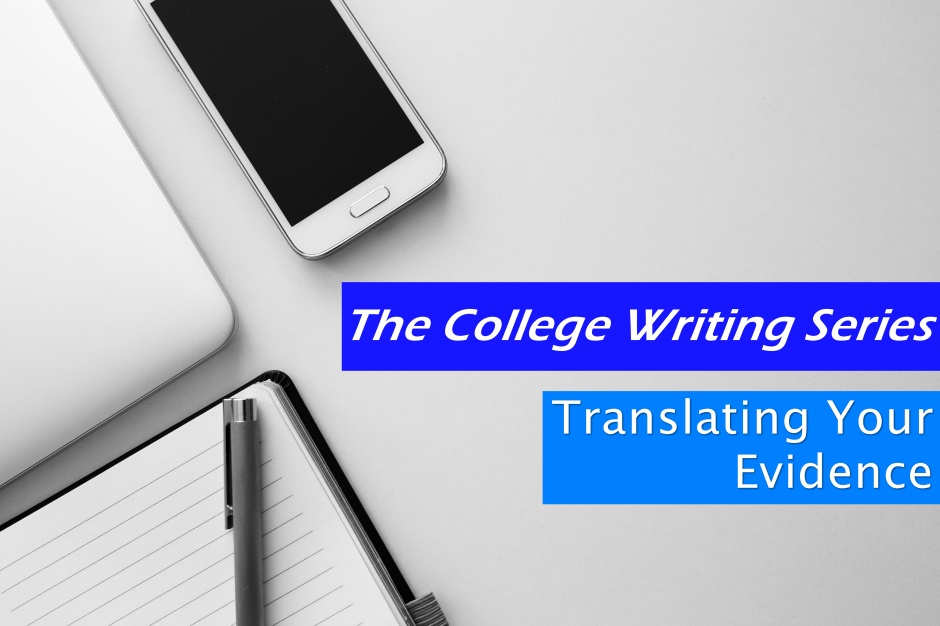 Now that we have gone through the first step of the essay process (picking evidence), it’s time to analyze your evidence. As I’ve said in past posts, college writing is about creating your own insight, rather than writing about other individual’s insight (for example, writing a book report). Professors do not want a review of the reading, they want to know what you thought about it. Being able to present your thoughts in an organized, easy-to-understand manner will earn you the better grade.

“How do I go about analyzing my evidence,” you ask? In CEA format, there are three steps:

In this post, I’ll walk you through the first step, the Translation.

Translation – What does that evidence mean?

In the Translation, you want to explain your evidence in simpler words, make it easier to understand. For instance, let’s say that you were using this piece of evidence in your paragraph:

As stated by Fill-in-the-blank Magazine, “out of all wrongful convictions in the United States, 80 percent has been caused by eyewitness misidentification”.

Note: I completely made up that sentence, it is only to be used for this example.

Eyewitness misidentification is the occurrence of a witness at a crime falsely accusing an innocent person of the crime.

Another thing to remember is that we can have as many translation sentences as we want, just as long as we are still describing our evidence rather than getting a little off track.

I would add another sentence to our evidence above. Putting a percentage into a physical representation sometimes solidifies the evidence into the reader’s head. Therefore, I would add this sentence:

According to Fill-in-the-blank Magazine, if five falsely convicted individuals stood in a line and asked how they were sent to prison, four would say that it was because of eyewitness misidentification.

In the end, this is what my paragraph would look thus far:

All in all, this portion of our paragraph doesn’t look too shabby. The Translation part of Analysis is usually the easiest part.

Don’t forget to join the waitlist for my upcoming course here!

I hope you enjoyed this post in the College Writing Series. Next time, I will tackle Warrants, the second step of Analysis.

3 thoughts on “The College Writing Series: Translating Your Evidence”