Remember your old boring Geography class in school? Did you ever wonder whether it really mattered if you knew exactly where various states were located in the United States? Really, you are not even able to drive yet and what if you never planned on even visiting those states when you got older? Well, I’ve noticed the fruits of this mentality in adults over the years, so this year I wanted to try something different with the Tribe.

Now in full disclosure, Lil Pappa (my dad) would take the fam across the country to California and one of my favorite activities (besides counting BJ Trucks…but more on that another day) was following along in the atlas, and observing the topography and demographics in each state.

Therefore, we are combining Geography with a bit of Sociology. We are choosing various states and besides just asking questions like, “What are the main tourist attractions in the state?”, they are making a short analysis of each state within Neely Fuller’s Nine Areas of People Activity paradigm:

With that background, I pass it over to Lexi…

For my geography work, I had to answer questions on the state of Arizona. I gathered information and answered questions in the areas of economics and education, and then put the data into a chart form. The first question I had to answer was for economics.

2. Is there a difference between various people groups in Arizona?

I gathered this information and then put it into two charts, one for Race and one for the political party affiliation: 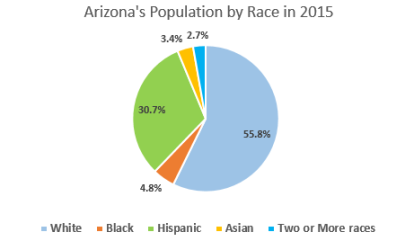 I had to also answer two questions on the subject of education.

2. Is there a difference between various people groups in education levels?

I put together I chart that shows college graduation rate for four-year graduates:

This lesson really helped me understand more about the state of Arizona and finally know the sales tax!