“To handicap a student by teaching him that his black face is a curse and that his struggle to change his condition is hopeless is the worst kind of lynching. It kills one’s aspirations and dooms him to vagabondage and crime”, is what Carter G. Woodson said in his book The Mis-Education Of The Negro, written in 1933. What he means is that by not teaching the Black child about his history and only about Roman or Greek history, he will never see the importance in the color of his skin.

Most people would say that there are places that Black-Americans could go to learn about their history, like black colleges and universities. But Carter G. Woodson says, “for example, an officer of a negro university, thinking that an additional course on the negro should be given there, called upon a Negro Doctor of Philosophy of the faculty to offer such work. He promptly informed the officer that he knew nothing about the Negro. He did not go to school to waste his time that way”. Later Woodson says, “even schools for Negroes, then, are places where they must be convinced of their inferiority.” The National Center For Education Statistics (NCES) says that there are 100 Historically Black Colleges and Universities (HBCUs) in 19 states. In 2013, non-Black students made up 20 percent of enrollment at HBCUs, compared with 15 percent in 1976. The NCES says that black students enrollment in HBCUs has fallen over time, from 18% in 1976 to 8% in 2013.

Black children in school should be taught about Benjamin Banneker along with Albert Einstein, and if we should be taught about Martin Luther King Jr., we should also be taught about Malcolm X and the Black Panther Party. My dad bought a “Christian” history book that he wanted me to read for schoolwork. We did not use exclusively, but instead, used it in sections and to compare it with other historical textbooks and writings. I read it and almost immediately I found that when the book was talking about immigration, the percentage of “black immigrants” was high. But they were not immigrants, they were slaves. The author would rather say that the Africans were immigrants than slaves. Also, when the book showed a picture of slaves working with cotton, the author did not give any detail of who they were. 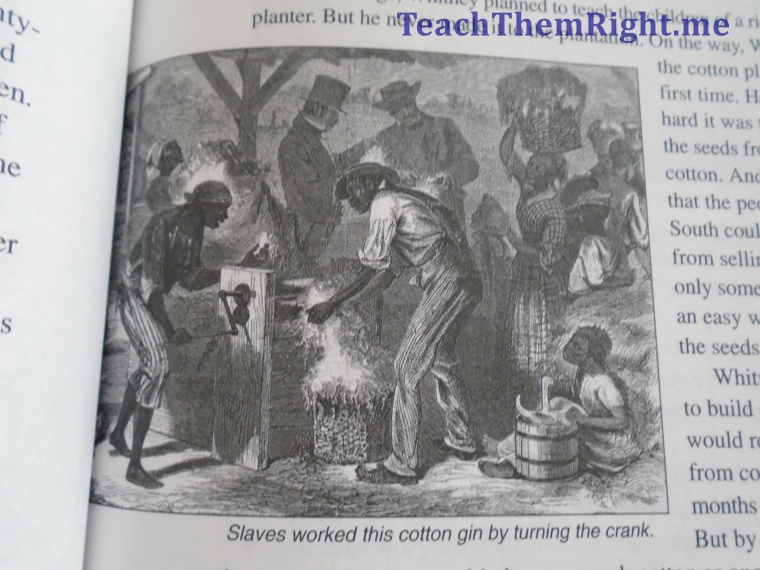 Slaves working the cotton gin in my history book, with the slave owners looking over their work. But there was no explanation of who, or why they were slaves.

Cover of the history book.

As Lexi was getting ready to publish, this came in hot off the press. I felt it summarized perfectly her point on why truth over “version” should always win, especially for those who claim to be followers of Christ, the author of Truth!

One thought on “Black Child In A White Education System”